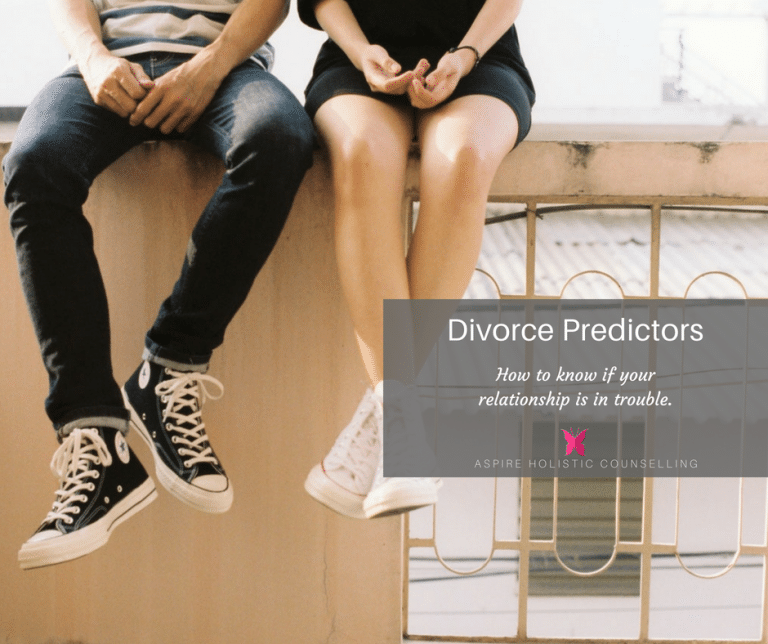 Relationships can go from honeymoon phase to falling apart in a span of a few months or years, causing us wonder what went wrong. Being aware of the 4 Horsemen of Relationship Apocalypse or divorce predictors can support you make a reasonable decision and feel happier and more secured in your relationship.

4 Most Destructive Predictors of Divorce

In his research, relationship expert John Gottman discovered four negative behaviours that have a 93% chance of resulting to the end of a relationship. Referred to as the Four Horsemen of the Relationship Apocalypse, these being: criticism, contempt, defensiveness and stonewalling.

The first horseman, criticism, is the most commonly used by couples when attempting to manage conflict. Criticism is destructive in a relationship as it is used to attack your partner’s character. There is a considerable difference between a criticism and just offering a critique or complaint. Saying, “It infuriates me when you’re running late and don’t call to inform me.”Is an example of a complaint and the critique is directed solely at your partner’s behavior. But when you say, “You never respect other people’s time,” it targets your partners personality and character.

Often, when arguments arise, we tend to bring out in the open our partner’s faults. When done repetitively this behaviour causes your partner feel rejected, prompting him/her to respond defensively. Neither person will feel heard or appreciated within the relationship. Each person may feel miserable about themselves whenever you are both together.

Once criticism becomes pervasive and escalates with more passionate intensity, it will eventually lead to the second horseman: contempt.

When communication has overtones of disrespect, disgust, eye rolling, sneering, ridiculing and calling him/her names. While criticism is an attack on a person’s character, contempt is placing yourself in a position of moral superiority over your partner. According to Gottman, contempt is the most significant predictor of relationship separation and should be avoided at all cost.

Contempt destroys any feelings of admiration and fondness in a relationship, that sense of “togetherness” of the relationship.

During conflict, it is effortless to slip into a pattern of defensiveness. Especially if you have felt that you have been unfairly accused or not being heard. Playing the victim and looking for excuses and counter-arguments to attack back at your partner to score points against their partner.

Defensiveness is frequently a response to criticism and does have a negative effect on a relationship. When you are being defensive, you are rejecting your responsibility for your part in the problem. Triggering a cycle of blame where your partner then reverses the blame and redirects it back towards you. The only outcome is escalation in the conflict.

It is a challenge to be the first one to apologize, especially if you’re the one being attacked. But the defensive approach is not a beneficial way to manage conflict. The best way is to try to understand where your partner is coming from and to accept your responsibility and admit your fault of the problem.

Stonewalling can be the most frustrating of all four horsemen to work with. Instead of confronting your issues as a couple, it will feel like your partner is ignoring you. By either walking away, talking on the phone or completely shutting down and withdrawing from any conversation with you. Typically those who “stonewall” have become emotionally overwhelmed by the three previous horsemen and it can merely be a way to calm themselves after a argument. This behaviour is just as destructive. For the partner who is being ‘stonewalled’, they may start to think that you don’t care enough about the problem to be willing to resolve it. Effectively pulling away from the relationship and refusing to work together on your relationship problems.

Observing when you or your partner are starting to feel emotionally overwhelmed. Agree to have a twenty to thirty minutes break and discuss the matter when you are calmer and more relaxed. Take advantage of this time to engage in something that soothes you, maybe go for a walk alone or read a book. Then return back to the conversation when you feel you are ready.

If you and your partner frequently engage in the following behaviours, don’t feel frustrated. Remember it’s easy for couples to be unaware and fall into the cycle of criticism, defensiveness, contempt and stonewall when attempting to manage conflict. Without intervention from trained relationship counsellor, it may seem the 4 Horsemen of Relationship Apocalypse are unfixable. But there are antidotes that will assist you in managing relationship conflict and discover new ways to communicate effectively.